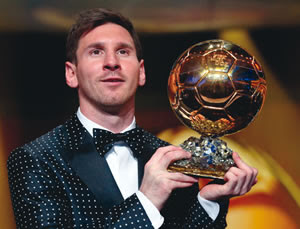 Lionel Messi has netted the prestigious Ballon d’Or for an unprecedented fourth time.

And the Argentina megastar said, “To tell you the truth this is really quite unbelievable. The fourth award that I have had is just too great for words. “I would like to recognise my other colleagues from Barcelona.

Andres it has been great to train and play alongside you. “I would also like to recognise all of my friends in the Argentinian national team, everyone that has worked with me, coaches and staff and my family and my friends. Also my wife and my son. Thank you.” The European Ballon d’Or, last won by the Argentine in 2009, merged with FIFA’s World Player of the Year award in 2010 to become the FIFA Ballon d’Or.

And Messi, who broke Gerd Muller’s 40-year-old record last month by scoring 91 goals in a calendar year, had backed Iniesta to scoop the prize.

At long last, US’s Abby Wambach can be called the top women’s soccer player in the world after she captured the FIFA Women’s World Player of the Year award.

Spain boss Vicente del Bosque won the 2012 FIFA Coach of the Year award after leading his country to its third consecutive major trophy at Euro 2012.

There is no single English Premier League player in the list.

Real Madrid goalkeeper Iker Casillas earned the nod at goalkeeper, while his teammates Sergio Ramos and Marcelo made it into the defence alongside Barcelona duo Dani Alves and Gerard Pique.

Unsurprisingly, both Ronaldo and Messi made the cut up front, with Atletico Madrid striker Radamel Falcao completing the FIFPro World XI.
Source : SOCCER
Posted by Unknown at 9:29 PM